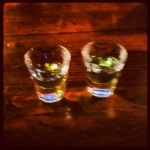 Convenient stores should only sell booze and smokes. There is the most well stocked minimart by my house. It’s run by a Korean couple and they are really good at what they do. They have every item you could possibly want; except water chestnuts. I know because I asked. On days after I get off the bus from work, having bared the brunt of a shitty job and the smell of the homeless man’s feces sitting next to me on the packed bus; I’m usually ready for a drink. I try to hold off until Wednesday, which seems to be some dark cosmic day of the week for me. It’s the hump day, but what are we supposed to hump? I was supposed to go to a bar with coworkers but it was too packed, so I left without sitting down. Downtown Seattle doesn’t have enough bars; it’s the sign of a civilization with fucked up priorities. Bars are older than Jesus Christ.

My head was pounding and the more people I was around, the louder the banging got. I needed solitude or at least some time to wallow in self pity without having to worry about the outside world hearing me talk to myself. I don’t care if people hear me anymore. I bought some dog treats, shampoo and two half pint bottles of whiskey. The Korean lady smiled because I always buy my smokes and booze there so I’m a well paying and consistent customer. Standing in line in front of me were some gnarled longshoremen. Dudes you don’t want to fuck with. They have scarred hands and livers the size of watermelons. They work and toil in the dark, cold mist of the Seattle docks. A place where there is no sun and only moss and mold can grow there. Each guy had his poison for the night on the counter and we all waited anxiously in line. Any hesitation by a customer, like fumbling with their change, was unacceptable. Booze needed to go down gullets. I needed a drink, but these guys needed one more. So I waited, tapping my fingers on the bottles. Finally it was my turn. I paid and left the store still feeling anxious, like I needed to get something back that life had taken from me.

Just as I pulled out one of the small bottles of booze to have a hit before the long walk up the hill, a homeless man asked for money. He hung around the store and always tried to bum change for the bus, (it was the same bullshit story, he had to get downtown and if he only had two bucks his life would turn around.) Usually I’m ready for him and I put my hand up and lie saying, “No, sorry. I don’t have any change. I carry only credit cards.” It didn’t matter if I had a pound of quarters weighing my pants down, the man would get no change from me. But this day, he put his hands out. His palms were huge, like he was holding up ahandkerchief made of calloused flesh. Before I knew what I was doing, I reached into my coat pocket, grabbed one of the small bottles of whiskey, and dropped it into his hands. He caught it and his hands closed together like a Venus Fly Trap. He couldn’t believe his good fortune and I was shocked at my own generosity. Some may say it’s wrong to give booze to a homeless alcoholic, but who am I to judge?

He clasped the bottle and looked up at me. His face was filthy, like fate had used it for toilet paper, but his stunning, blue eyes cut through the grime. They were eyes that never age and are filled with the energy of a vibrant soul. Eyes you would expect from a person who hadn’t given up on life, and maybe he hadn’t yet. The look he gave transcended appreciation. I had given him something more valuable than money. I gave him a shot of forgetting; forgetting the rain and noise and cigarette butts and the indifference that walked past him every day. I winked and started the long walk up the hill. The gift of my own bottle was waiting for me when I got home after another shitty Wednesday. And with that thought in mind, I skipped the rest of the way home while the rain came down and the buses roared by, feeling like I had done something good; or at least something better than usual.