Tours, tours everywhere. One month spent following a band on tour, the next, participating in a blog tour, and the one after that (next month), a book tour. If I can work this good tour juju I’ve got going on into a tour of the Bestseller List, I will swoon. (I was going to say “a tour of Roger Clyne’s pants,” but that seemed too forward. But can you blame me for the impulse?)

As I’m amping up to release and promote my first novel, Beauty of the Broken, which will be released by Simon and Schuster on September 30 (less than three weeks–holy cow!):

the lovely Eva Langston has asked me to participate in the My Writing Process Blog Tour. How can I say no to this face?

Eva Langston (that’s her up there ^) is a brilliant novelist, mathematician, and yogini. Her latest novel was recently signed by Cornville & Walsh, so expect to have your socks blown off by her brilliance in hard cover form very, very soon. She’s published in myriad journals and has been nominated for a Pushcart.

We went to grad school together, and there is just something about drunken nights in Mexico that makes a girl hang onto a friend for dear life, whether the friend in question likes it or not. I don’t mean the way I hung (hanged?) onto her when we were stumbling home from cantinas (which I did). I mean the way I hang onto her now. (“Be my forever friend! Don‘t LEAVVVEEE me!”) Sometimes, if you give her too much wine, she will twist her body up like a pretzel and make you wish you did yoga too. I find that the best response to this behavior is to go eat pretzels. And drink more wine. But that’s just me.

Enough about them. Well, not quite enough. Did you notice the dip in Roger’s throat? Yeah. Me too.

Now, let’s talk about me.

Ladies and gentlemen, introducing TAWNI WATERS (and the crowd goes wild–please??? Anyone? Bueller?) 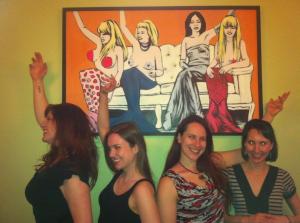 That up there is me, the front of the line mermaid. The back of the line mermaid is Eva. She has devil eyes in this picture, but that’s just a trick of the camera. She’s really quite lovely, nice, and pretzel-y. The hottie next to her is Merridith Allen. I tagged her to participate in the blog tour, so you’ll be hearing more about her next week. The beauty in front of Merridith is Caitlin, the only non-writer mermaid featured here. This picture was taken in San Miguel de Allende, Mexico. We were teaching at a writer’s conference, and somehow (tequila?), we ended up at some very nice rich man’s house drinking fancy things and being mermaids. I still have no explanation for that turn of events.

My tan. Ha! That is so not funny, and so not true. Actually, my skin is competing in a “resemblance to a plucked chicken” contest. Not really. But kinda.

Writing-wise, I’m working on a novel called The Air She Breathes. It’s YA, because that’s what I do, accidentally. (Beauty of the Broken is a literary novel about a teen, so it got sold as YA, which made me a YA writer.) The Air She Breathes is about a girl driving across the country on a Harley with the father of her baby (who doesn’t know she’s pregnant) trying to come to terms with the death of her mother and decide what the hell to do about being pregnant. It was inspired by this song:

I know Neil Young wrote it, but Sons of Bill made me fall in love with it, so they get credit for my inspiration. It was also inspired by my dear friend Julie, who is a kick-ass Harley rider, and really did work at a diner and have two kids. This is us sitting outside a Roger Clyne show in sub-zero temperatures, waiting for the doors to open, praying for divine intervention, wondering if Jesus ever loved us, how he could let us sit in the freezing ass cold for so long. (Jesus said, “I didn’t make you get to the rock show two hours early, dumb asses.” Sometimes Jesus calls us dumb asses, but he means it “in a good way.”)

2) How does your work differ from others of its genre?

I could tell you, but then I’d have to hire ninjas to kill you. And I actually know a ninja. We will talk more about her later. Cover your eyes if you don’t want to be killed by ninjas. If you are willing to take your chances, keep reading.

My work differs from others of its genre because it features no vampires. Also, it’s been described in reviews as “heartwrenching” and “heartbreaking” and “grabbing ahold of your heart and not letting go,” which means I’m kinda brutal, even though I’m writing YA. It’s gritty and real, and again, no vampires. Or wolverines. Or fantasy creatures of any kind. I did think about featuring a mermaid in Beauty of the Broken, as a shout out to my time in San Miguel, but I couldn’t really work it into the lesbian-coming-of-age narrative set in New Mexico (no ocean).

I do what the voices in my head tell me to. Totally lying. Ok, not totally. But I usually don’t plan what I’m going to write. I wait for something beautiful to come to me, something that makes my little heart go pitter-patter, something that makes me swoon. I can never tell what I’m going to write. For instance, I had no idea this blog was going to read like a cracked-out-groupie-psycho wrote it, though I should have suspected as much since I started writing it after my fourth cup of coffee. I swear to Jesus, I am a serious artist who wins awards for her work.

Ok, wait. I’m supposed to have a process? I really don’t have a process. I write when the muses strike, which is usually at 2 a.m. when I have to teach the next morning. (I teach college creative writing. God help my impressionable, young students.) I’m sharing a poem about my muses, which I think describes my writing process better than I ever could when all hopped up on the C (caffeine). This was written during a time when my muses deserted me. Because I’m not one of those writers who forces herself to write when she doesn’t have anything to say, I didn’t write a word for months. It terrified me. But the muses eventually came back and forced me to write in tedious twelve-hour stretches with no bathroom breaks. They had bikini lines when they returned. I’m still suspicious about what they were up to. 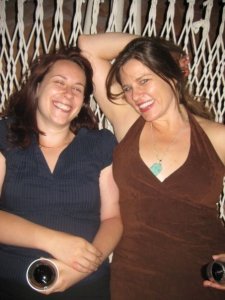 This is Merridith and me in a hammock in Mexico during grad school. (We had summer internships in San Miguel, but we totally took our writing seriously and did not spend our time lounging in hammocks drinking.) Merridith is the ninja I was telling you about earlier. She actually does have a ridiculous number of black belts (nine?) and could kill you with a spoon if she had to. However, if you read the portion of this blog that will get you killed by Merridith, when she shows up in your bedroom, you can also ask her to use her bowstaff instead. She’s flexible like that. Sometimes I borrow her underwear, but only when I have forgotten to pack my own, and we are on a road trip. We fight about who will write the humor column about the times I have borrowed her underwear. In addition to being a ninja and and an underwear owner, Merri is one of the best writers I’ve ever had the honor of knowing.

Merridith’s plays have been produced by The Manhattan Repertory Theatre, The Provincetown Theater, The Hudson Guild Theatre, and The Dorothy Strelsin Theatre as part of the Midtown International Theatre Festival.  Her play, “The House of Fallen Snow,” was a finalist in The Strawberry International One-Act Festival, and will be published next year.  Other publication credits include a ten minute play in Northern Light, a literary journal through Edinburgh University, and work featured in the upcoming 2011-2012 Best Women’s Stage Monologues and Scenes, through Smith & Kraus publishers.

I couldn’t find a good picture of Kimberly and me together, so I had to settle of one of her and my writing mentor, Joseph Boyden. You should read Joseph’s books because they win huge awards and stuff, but you should especially read this one, because it made me cry.

They are both kick ass writers. It seems like I should have many pictures of Kimberly drinking and being wild in Mexico/New Orleans/Utah together (yeah, I said Utah–somebody tell Kimberly NOT to bust open a bottle of wine at a Mormon music festival in the park), but apparently, I didn’t like the way I looked in any of them and deleted them all. Did I mention I’m really vain?

When Kimberly isn’t trying to get me arrested in Utah, she works on her short story collection, screenplay, and novel. She also teaches English. Her favorite pass times are to travel across the country to visit friends, hike on random trails, admire sunsets, listen to birds chirp, and on occasion read fortunes when what is to come isn’t written in a book.

Sometimes, when I jump into pools fully clothed at writer parties, Kimberly takes me home and hands me over to Jeni Stewart, the fantastic maven of this blog.

This is Jeni kissing my cheek at Pal’s in New Orleans. There is a freaky naked picture of Burt Reynolds on the wall in the bathroom. Just a heads up, so if you wander into the loo there, you will be prepared for the eye-trauma. It stays with you, folks. We are talking serious therapy.

And the grand finale: my brilliant, beautiful boss, Elizabeth Ayres, who after reading this is probably considering firing me. (Don’t fire me, Elizabeth. I’m only like this when copious quantities of caffeine are involved.)

Elizabeth and I have never been to Mexico together, as we have never had the honor of meeting in person, but the first time we talked on the phone, I knew she was a kindred spirit. I am designing courses for The Elizabeth Ayres Center for Creative Writing (http://creativewritingcenter.com/about/elizabeth-ayres/), one of which will begin in October. She makes me laugh hard every time we talk.

Elizabeth has been hailed by New York magazine, the Voice of America, New York Newsday, the Village Voice and The Woodstock Times for her groundbreaking teaching methods.

A writer and charismatic workshop leader for over 40 years, Ms. Ayres has taught at New York University and the College of New Rochelle; at the New York Open Center and Ghost Ranch Conference Center; through Poets-in-the-Schools and Poets & Writers; in libraries, senior centers and other public forums.  In 1990 she founded the Elizabeth Ayres Center for Creative Writing which offers writing retreats and online writing classes to a global community of aspiring writers.

Ayres is an award-winning poet and writer, author of Home After Exile, Mirror of Our Becoming, Writing the Wave and Swimming the River of Stone, as well as the audiobook series Creative Writing from A to Z and the audiobooks in the Invitation to Wonder ‘Journey’ Series (based on Mirror of Our Becoming.)  She holds a Master’s degree in Creative Writing from Syracuse University, where she was a Cornelia Ward Fellow.

Adios, amigos y amigas. I hope you’ve enjoyed my tour. If I have traumatized you in any way, here is a photo of a smiling ostrich. I hope it heals your wounded psyche. I call him Serge.

One thought on “My Writing Process Blog Tour by Tawni Waters”